Search Is On For Safer Helmet 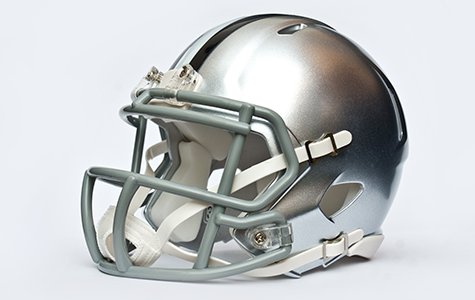 The crack of helmets hitting might be a signature sound of a football game, but many researchers also hear it as a warning for potential danger to the brains of players.

The hard plastic helmet has been standard equipment for football players since it was introduced in the 1940s as protection from skull fractures. The helmet is now seen as contributing to the concussion epidemic that afflicts the sport.

The search for a safer helmet has become football’s Holy Grail. In early January when a Seattle-based startup unveiled a new helmet design, it was covered as sports, health, technology, and business news.

The helmet replaces the hard exterior shell with a softer outer skin that absorbs and slows blows, which, in theory, better protects players’ brains.

“There’s a lot of optimism around the potential for their product,” Jeff Miller, the NFL’s Senior Vice President of Health and Safety, told Bloomberg after the introduction. “The idea is that it’s disruptive technology. How much it revolutionizes the industry, we’ll see.”

“Without commenting on a specific product, it’s heartening to see interest and investment in safer helmets,” Dr. Bernick said. “The size and speed of today’s players creates tremendous force and with it a need to develop better equipment.”