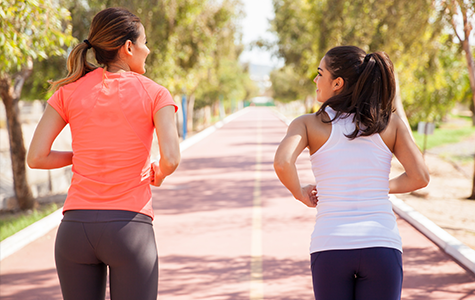 To say someone or something “has legs” means they have staying power. Now scientists are finding that fit legs might provide the mind with more staying power.

Researchers at King’s College London studied sets of female twins with the average age of 55 and discovered that the one with the more powerful leg muscles typically exhibited slower agerelated cognitive decline.

The findings, published in Gerontology, suggest that something as simple as walking more, which over time increases leg power, can make a positive long-term contribution to keeping brains healthy in later years.

Starting in 1999 and continuing for a decade, scientists tracked 324 healthy female twins from the TwinsUK volunteer registry and assessed their general health and lifestyles. The use of twins allowed the researchers to rule out genetic differences as a possible cause for the results.

What they found was the twin with more leg power at the start of the study usually sustained her mental faculties better 10 years later and with fewer brain changes than her sister.

“Working the leg muscles is an important part of any exercise program, and this research adds to that importance,” said Jennifer Nash, Manager of Rehabilitation Services for the Cleveland Clinic Lou Ruvo Center for Brain Health. “The legs’ hamstring and quadriceps muscle sets are among the largest and strongest in the body, something that possibly amplifies the benefits of exercise.”

Nash, who holds a doctorate in physical therapy, said that walking, squats and lunges provide good leg-muscle workouts. However she cautions that anyone, particularly seniors, should seek proper advice before embarking on an exercise regimen.

Experts have long associated good physical health with better brain health, but the King’s College study is thought to be the first to show a specific link between greater leg power, meaning force and speed, with slowing cognitive decline.

“It’s compelling to see such differences in cognition and brain structure in identical twins, who had different leg power 10 years before,” said Dr. Claire Steves, lead author and a King’s College senior lecturer in twin research. “It suggests that simple lifestyle changes to boost our physical activity may help to keep us both mentally and physically healthy.”

In a statement announcing the findings, King’s College said more studies are needed to understand the specific cause and effect physical activity has on brain structure and cognition.