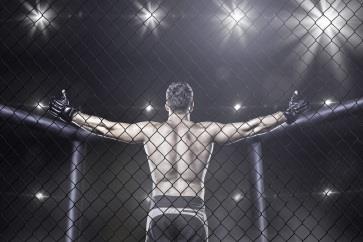 The progress made by the Cleveland Clinic Lou Ruvo Center for Brain Health in studying ways to improve fighters’ safety led the UFC to pledge an additional $1 million toward the research. Ultimate Fighting Championship, by far the largest promoter in mixed martial arts, announced earlier this month that it would contribute $1 million over five years to support the Professional Fighters Brain Health Study, which is ongoing at the center.

“We have learned quite a bit in the first four years of the study about how repetitive head trauma affects the brain and how we can detect accumulating injury,” said Dr. Charles Bernick, Associate Medical Director at the Lou Ruvo Center for Brain Health and principal investigator of the study.

The additional support from UFC, Dr. Bernick said, “will allow us to follow the participants over longer periods of time and develop ways to improve safety in combat sports, along with others exposed to repetitive head trauma.”

The study has already led to a set of model proposals for athletic commissions and other sanctioning bodies to better monitor the brain health of boxers and MMA fighters and to educate trainers on the effects of concussions.

“UFC is always looking for opportunities to invest in industry-leading health and wellness programs and providing resources to develop its athletes inside and outside the Octagon,” said UFC Chief Operating Officer, Ike Lawrence Epstein.