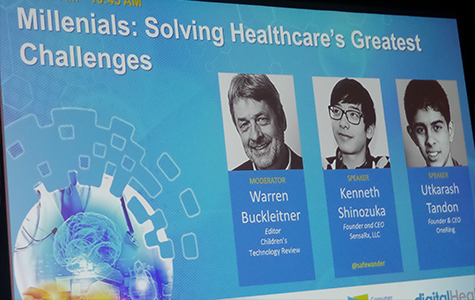 About 60 percent of America’s 5.5 million Alzheimer’s sufferers will wander from their caregivers at some point, but 15-year-old Kenneth Shinozuka worried most about one: His grandfather.

As the grandfather’s disease progressed and he became more prone to walking away, a worried Shinozuka searched for a solution. Finding none, he invented his own.

He created a smart-phone app called SafeWander that alerts caregivers with a motion detector attached to the sock of the patient. If he or she moves at night, a super-thin film sensor sets off an alarm.

“My grandfather has lost the capability to eat by himself and to walk by himself . . . This is very real and very scary,” the now 17-year-old told an interviewer.

He entered the wearable device in the Google’s Science Fair, writing in his application, “In addition to solving the originally intended problem, using the sensor to monitor a larger population of Alzheimer’s patients could lead to a fundamental understanding of the causes of wandering and thus ways to mitigate or prevent it.”

The New York City teen won a $50,000 prize from the fair, attended the 2015 White House Science Fair as an exhibitor, and was a featured speaker at the Consumer Electronics Show in Las Vegas. Members of the SafeWander Team demonstrated the sensor at the show.

“This is a creative approach that also shows how the fight against Alzheimer’s bridges generations,” said Dr. Kate Zhong, Senior Director of Clinical Research and Development for the Cleveland Clinic Lou Ruvo Center for Brain Health, who saw the CES presentation. “Concern for older relatives is a big driver for many people who pursue careers in brain health.”

Shinozuka is now working to commercialize his device, but there is a greater goal. He says he wants to eventually become a neuroscientist and work to “solve some of the mysteries of the brain, and invent tools to ultimately, I think, cure Alzheimer’s.”