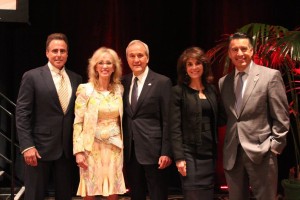 The Chairman and Co-Founder of the Keep Memory Alive board and Senior Managing Director of Southern Wine and Spirits, Larry Ruvo was honored with the inaugural Caesars Community Hero award for his tireless and passionate support of the community.

The Governor presented Mr. Ruvo the Hero award created by Caesars Foundation to recognize and honor the philanthropic achievements of Las Vegas community leaders.  Upon accepting the award, a humbled Mr. Ruvo discussed his passion for why he started Keep Memory Alive, which supports the Cleveland Clinic Lou Ruvo Center for Brain Health.

Mr. Ruvo’s inspiration to create Keep Memory Alive, build the Lou Ruvo Center for Brain Heath, and establish the historic partnership with Cleveland Clinic, came from his own personal experience coping with his father’s Alzheimer’s Disease and the impact the disease had on his mother as a full time caregiver.

Mr. Ruvo reminisced about his beginnings at the Caesars Hotel as a bellman many years ago, and how his connection to Caesars has ultimately resulted in  a new partnership to the Caesars Foundation.

The connection continues with the Caesars Foundation’s generous support and commitment to www.HealthyBrains.org, an exciting and innovative initiative to engage and empower all who want to maintain and improve their brain health, reduce the risk of brain disorders, and join the fight to discover new treatments that prevent, treat, and cure Alzheimer’s Disease, Parkinson’s Disease and Multiple Sclerosis.

Mr. Ruvo lost his father to Alzheimer’s Disease, his heroic endeavor will continue to inspire us all to  keep memory alive.